Here is my piece for “Le couleur de l’etrangete” An Art Show Tribute to the Films of Marc Caro and Jean-Pierre Jeunet at Spoke Art Gallery. The show’s title means “the color of strange.” My fiber art piece is titled “Parapluie” meaning umbrella. Amelie was probably the most popular film to do a piece for this show. I wish I had time to make another piece…I probably would have done something for Alien Resurrection. : D

Pieces will be for sale on the site at: http://store.spoke-art.com/ 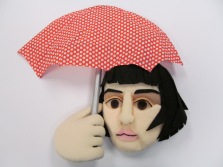 Amelie and her umbrella 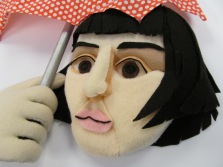 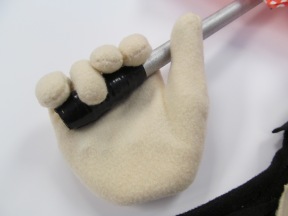 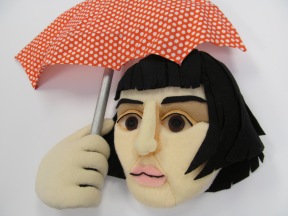 My jewelry design project, REfused Designs Studios, has a new home! Here is a picture of the set-up at the new studio space off of Northloop. Its about 400 square feet, wood floors, and one wall is covered in a mirror. The space was used previously as a dance studio where they taught bellydance, pilates, and yoga. 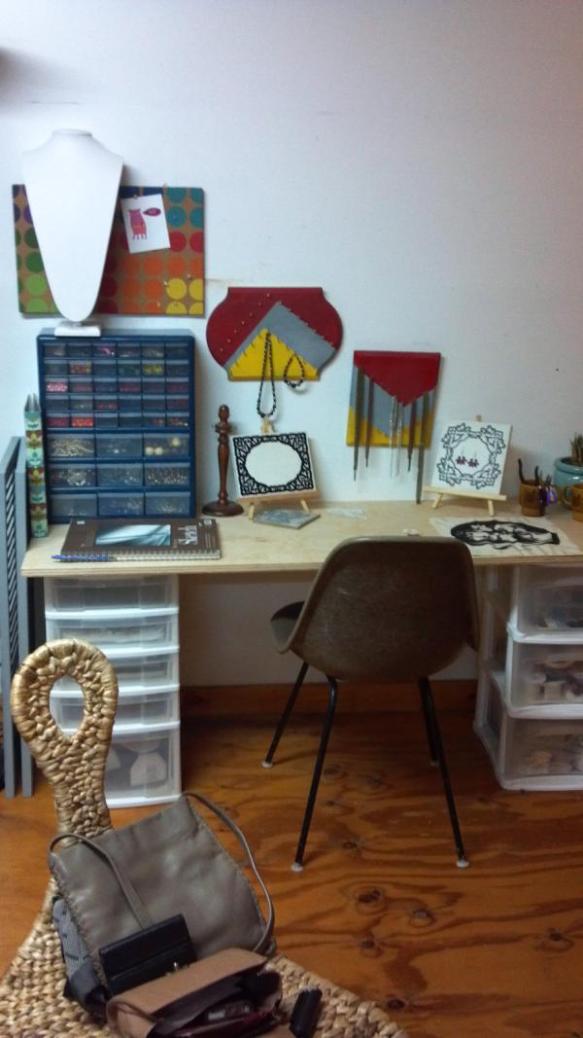 I’m sharing the space with painter Pat Taylor. We might be in the West Austin Studio Tour this year. From what I hear it’s the Spring version of the East Austin Studio Tour and it basically encompasses the rest of Austin. I’ll probably use the space for larger fabric sculpture, puppet making, and perhaps some filming. I’ve had an idea for a film project that I really want to do. 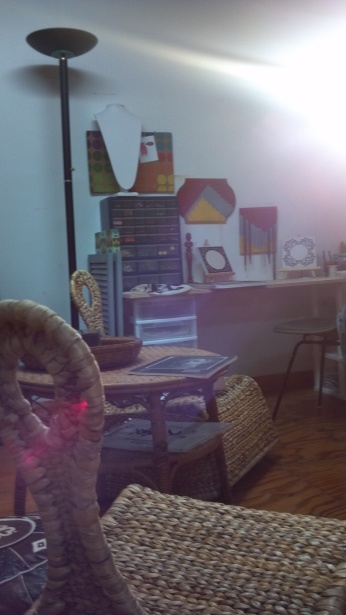 The art show tribute to the films of the Coen Bros. and Quentin Tarantino opening premiere at Bold Hype Gallery in New York City had a line going down the stairs and around the block with people waiting for an hour and a half to get inside. After the NY premiere, the show traveled  to San Francisco, displaying at Spoke Art Gallery and then wrapping up in early October at the Beyond Eden Art Fair in Los Angeles where they showcased artwork by prominent contemporary artists. I submitted two soft sculpture/fabric art pieces that were representations of weapons from the films of these directors. The idea was taking a deadly and otherwise frightening object and fabricating it out of materials normally associated with pleasant, tactile experiences.

The captive bolt stunner device from “No Country For Old Men”, that’s the apparatus Anton Chigurh carries around with him busting locks and skulls (it is supposed to be used for euthanizing livestock), inspired me to create the piece entitled “Sweet Deal” which is presented in a point-of-sale experience. Its made out of felt and cotton jersey material. The other soft sculpture entitled “The Half-Breed”, is a soft sculpture replica of Gogo Yubari’s weighted chain weapon from “Kill Bill”. After doing some homework on ancient Japanese and Chinese weaponry, it appears that the weapon Tarantino crafted for Gogo was a combination of the kusari-fundo weapon (think longer nun chuks) of Japan and the meteor hammer (resembling a mace on a chain) from China. This soft sculpture was displayed as if in the armory section of a history museum complete with informative plaque. This piece was created using crochet, knitting, wet felting, and sewing techniques. This show got wondrous press through several magazines, newpapers, and well over 80 websites/blogs. I have a couple links in the “Press” section of my site if you want to read up more about this show. I heard from the curator that the Coen Bros. made an appearance and Frances McDormand pointed out my piece “Sweet Deal” to them, and they loved it! I don’t think Quentin Tarantino made it to the show… I heard something about his lawyers checking us out though.